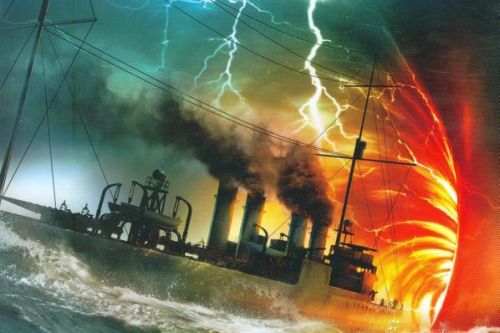 Forum about he Destroyermen series is a series of alternate history books, written by American writer and historian Taylor Anderson.

The logistic chain is long and near snapping on both fronts of the war, we are about to enter a phase of the war on the continents of Africa and South America needing land borne transport. So what do you think the Alliance needs most?

What if they don't stick to the slaves they brought with them? If they have been at war with the Doms for the last 100 years even intermittently that provides a basis for captives being sold into slavery. There is even the possibility of an illicit trade in females between the two nations. It will be interesting to see how it pans out

At news of the defeated Army of God's approach the native will take to the jungle removing what food they can, thus it is likely that Don Hernan will have to resort to long pig (people) before Shinya as the native may well greet the liberators and feed them.

You are probably right about the locals response to Hernan but that doesn't help Shinya at all. Now we have two levels of scorched earth between him and supplies. Refugee peasants hiding out in the jungle won't have much food to share. At best they might provide porters to carry supplies brought up from the coast but at the cost of being additional mouths to feed and this is assuming supplies are available from the coast - dubious. I still think the best way forward is blockade and sponsored insugency

Given Don Hernan I think he will try to escape with the Pope to Mexico City by sea to Vera Cruz.  Where the army that failed to take California is.  Depending on shipping available it might be possible to transport the Army of God too.  That's why I hope either reinforced Second Fleet, or the navy of the 1847 Americans is there to prevent that escape.

For the purposes of story telling I think Taylor will get Hernan to Mexico, though I suspect the Pope may receive his "ascension" in order to leave our loony friend in complete control. I image our two young aviator friends will witness a thrilling sea battle which may or may not see the demise of the Dom's Atlantic fleet and the army of god - that is assuming Hernan doesn't abandon it to its fate to save his own skin.

From the point of the final outcome of the war Hernan is the kind of enemy head of state you pray for - Churchill without any restraining advisers. We want him in charge - the next guy may actually have a clue.

@ Ceejay you have a devious mind, I like you.  Taylor Anderson commented on population, Empire, Dominion, and the 1847 Americans we have been discussing here on his Technical Discussions blog:

I glanced back at your formula for coming up with these numbers and it dawned on me that you were basing it upon several possibly faulty assumptions–some of which may be my fault, and others that I am not at liberty to expand upon yet. In regard to the Impie population though, I must admit I was quite rushed when I looked at your earlier estimate, and focused more on another part of the post, I believe. Since then I have considered and realized you were basing it upon a much more conservative rate of increase than I. In spite of everything else, there has been little hunger anywhere–the primary cause of high child mortality–whereas all the cultures thus far encountered historically bred like rabbits. Not only was modern contraception unavailable, they NEEDED to, to provide a large familial labor pool. Not to mention, the Impies at least, would’ve considered it their duty to increase the population. And the Doms multiplied at such a rate that they were willing to sell or SACRIFICE females! And the funny thing is, it wouldn’t even take a long sustained “baby boom” to create an exponential jump in population. But even if the Impies, for example, produced offspring at the historical (traditional family) norm, I’d certainly average the increase at greater than 2.5.

And don’t forget the colonial frontier. Higher mortality, compensated for by “tryin’ harder.”

And the Doms would have a significantly larger population than that, much more spread out. There was obviously a rather large pre-historic crossover (from a highly populous source, at the time.) Possibly more than one. And it is just assumed that it was a mere fishing village or something, but the “Czechs” have established that all crossovers need not take place at sea . . .

As to the 1847 Americans, I know I have left you very little to speculate WITH as yet, but that WILL change in the upcoming book. A LOT of things will be resolved, to a degree at least, in the next one. And Alexey, you assume constant warfare between the Doms and ’47s. That is not borne out even by available information. Constant animosity, perhaps . . . And you also assume they were badly defeated simply because they left central Mexico. If that were the case, why would the Doms resent them so, and refer to them as “Los Diablos Del Norte?” I suppose they might still resent the desecration of their ancient seat of power, but they “disengaged” themselves as well, down to New Granada. Why? You WILL soon know!

Hmm a lot of meat and mystery.  We'll learn a lot we have been guessing at.  I loved your escape thought I can see Taylor doing this or something else,  I can see Shinya impotent as Don Hernan and his army of God sails away from New Granada shaking in fury, not to mention the two Queens' disappointment, and Blas harrumphing at General Shinya, "Some military Genius!"

Greg Garrett is likely to put an oar in, too.  But probably too late or impotent with just Donaghey to prevent the escape.

I wonder if a whole Meso-American city state was transported looking at Taylor's comment, "There was obviously a rather large pre-historic crossover (from a highly populous source, at the time.)"

Exactly how? Currently the Alliance hold definite naval superiority. Unless Dom's would be able to threw yet another large fleet into evaluation, they couldn't do any large-scale naval transportation.

//Exactly how? Currently the Alliance hold definite naval superiority. Unless Dom's would be able to threw yet another large fleet into evaluation, they couldn't do any large-scale naval transportation. //

There will be ships at the Dom Capital, some Naval and many civilian ships to press for troop transports. The winds are such that going north west will be good for dedicated sailing ships. Remember that the Alliance's Second Fleet is currently in the Pacific licking its wounds not the Caribbean that is essentially a Dominion lake.

Remember that the Alliance's Second Fleet is currently in the Pacific licking its wounds not the Caribbean that is essentially a Dominion lake.

Yet another reason to put battlewagons into action and break through Paso del Fuego...

Trucks and narrow gauge railways. Eventually, tanks will have to be developed for one side to be victorious, given the technical evoluion of warfare... The fact that machineguns, automatic pistols, and breechloading rifles are in production, massed cavalry charges will soon be useless.